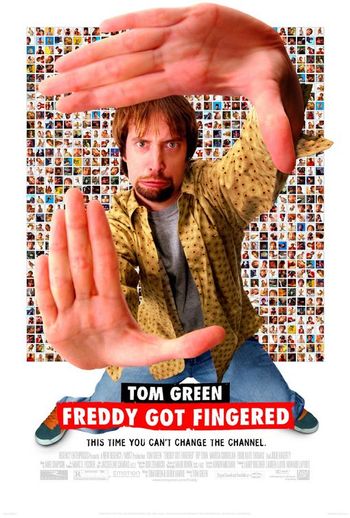 "I'm going to make you so proud, daddy."
— Gord, moments before yelling at a pedestrian to "get the fuck out of the way"
Advertisement:

Freddy Got Fingered is a strange and deranged black comedy film from 2001. It was written, directed by, and starring Tom Green, then fresh off his success on The Tom Green Show, which had just wrapped its fourth season.

The film follows Gordon "Gord" Brody (Green), an upstart cartoonist who heads to Los Angeles to obtain a contract for a television series. But when the producer tells him, quite rightly, that his ideas don't make any sense, he is forced to go back home to Portland, to the chagrin of his father Jim (Rip Torn). Hilarity Ensues.

One thing that nearly everyone who has seen this movie agrees on is that it is, to some extent, a Stealth Parody of the lowbrow "dude-bro" comedies that were popular around the time of its release. How much of the movie is a parody as opposed to just showing Green losing his marbles on camera, and whether that parody works, is and likely forever will be a source of debate.

Nothing to do with the other guy called Freddy who’s also known for his fingers.