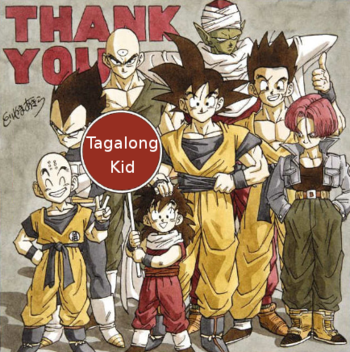 Except he's not as much of a load as he seems.
Ray Thompson: Can I come along? Can I? Can I?
J'onn J'onzz: I hesitate to put the boy in harm’s way.
Catman: Sure thing, little buddy!
Ray: Oh boy!
— Justice League, "Legends, Part 1"

Typically the youngest member of a group, the Tagalong Kid is usually the younger brother or sister of one of the older team members. They get to save the day about once per season, but in the worst case scenarios, they will end up being The Load or Designated Victim in every other episode. The "tagalong" part of their role almost always occurs after being told they are Most Definitely Not Accompanying Us.

If the kid is part of The Team instead of just a tag-along, the kid might sub in for just about any role but with the proper tropes behind him or her.

Team Pet is the animal equivalent to this, Robot Buddy the artificial version. Together, tagalong kids, team pets, and robot buddies were an irritating staple of 1980s Saturday morning cartoons, rendering many of them difficult to sit through today.