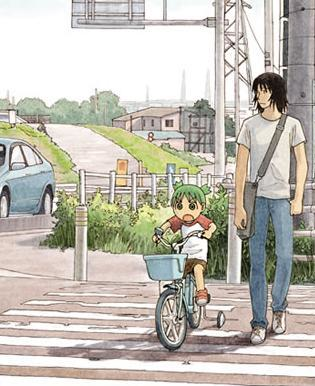 Today is always the most enjoyable day!
Advertisement:

Yotsuba&! (Yotsuba to! in Japanese) is an ongoing Slice of Life comedy manga by Kiyohiko Azuma, creator of Azumanga Daioh, first starting serialization in 2003, just under a year after Azumanga Daioh finished its run.

It stars a cheerful, energetic five-year-old girl named Yotsuba Koiwai, who moves into a new neighborhood with her adoptive father. She doesn't know very much about the world around her and is incredibly curious, but her father and their new neighbors (the Ayase family) are willing to help her out... or get dragged along in her wake, as the case may be. She does, technically, know the meaning of "restraint", but she has trouble pronouncing it. The odd title comes from how every chapter (but one) is named "Yotsuba & [Whatever]," where [whatever] is the new thing or concept she encounters that day, and the exclamation mark comes from her way of throwing herself full-throttle into anything she does.

Yotsuba&! started life as a series of one-shots released in 1998 under the name Try! Try! Try!. These comics were largely the same as the serialized series, but with some significant differences in character designs and personalities. After writing Azumanga Daioh from 1999 to 2002, Azuma decided to revisit the setting he created earlier, tweaking the characters and slowly refining his style.

Fifteen volumes have been released thus far in Japan, as of March 2021. Yotsuba&! has an irregular publishing schedule, as some years have passed where as few as four chapters were released due to Azuma's method of authoring, where chapters only make it once he has had a fruitful idea to put on paper. His meticulous artwork, often coming close to resembling real-life photographs, is another factor in the long delays between chapters. Volumes of the manga are released every 2-3 years.note To put that into perspective, an ongoing monthly manga from 2003 would have collected ~30 volumes by 2018.

The series is unlikely to receive an animated adaptation, with Azuma himself explaining

his belief that Yotsuba isn't well-suited to an animated format. It does, however, have an anime spinoff, Nyanbo!, featuring catlike creatures of the same species as Yotsuba's cardboard robot friend, Danbo. Yotsuba makes a non-speaking cameo in the end credits of each episode.