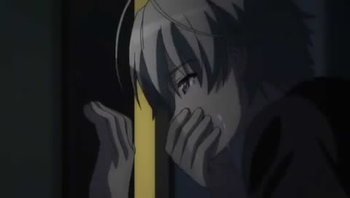 This was Haru's reaction when we tried showing him the picture that we planned on putting here.
Nail: Uh—Oh god, I—I think I'm gonna puke!
Piccolo: You can't puke, you're in my—
(sounds of Nail puking)
Kami: OH GOOD LORD, IT'S EVERYWHERE!
— Dragon Ball Z Abridged episode 43, in regards to Cell's..."eating habits".
Advertisement: