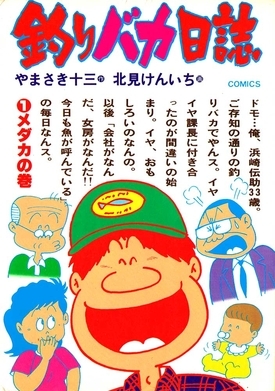 Tsuribaka Nisshi (釣りバカ日誌 Fishing Fool's Diary) is a fishing manga by Jūzō Yamasaki (story) and Kenichi Kitami (art) that has been serialized in Big Comic Original since 1979. It won the 28th Shogakukan Manga Award in 1983. The series has been adapted into a popular and long-running movie series, as well as a TV anime.

The story focuses on salaryman Densuke Hamasaki (a.k.a Hama-chan), whom his supervisor, Sasaki, has dubbed the "Fishing Baka" because of his passion for fishing. One day, Hama-chan meets and befriends an older fisherman named Su-san, who turns out to be Ichinosuke Suzuki, the CEO of the "Suzuki Construction" company that employs Hama-chan. The stories tend to focus on their relationship inside and outside the office.