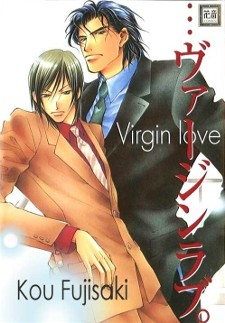 Part of a larger series of interrelated stories of salarymen, Fujisaki Kou's Virgin Love and its two direct sequels follow the rather smutty relationship of two business partners: Kaoru a mid-level manager at Todou and Daigo the executive director of Mercury.

After moving back to Japan to work at the Todou group, Kaoru takes to drinking alone every night out of boredom. He ends up getting picked up by fellow Ethical Slut Daigo, but only agrees to a one-night stand. A couple weeks later they meet at work. They begin a Friends with Benefits relationship, with Daigo secretly hoping for more. Kaoru, having commitment issues thanks to his Abusive Mom, eventually calls it off when he finds himself going Crazy Jealous Guy over little things. After Daigo shows up to stop him from sleeping with Yonehara, a CEO who had been harassing him, they reconcile and decide to be lovers.

...Junai No Seinen picks up after this, with Daigo still worried about what Kaoru's feelings for him are. This only gets worse when Kaoru's ex-sex friend Ian shows up hoping to strike something up again and Kaoru takes advantage of this to make Daigo jealous in order to feed his own insecurity. It backfires when Daigo leaves him in anger. After a Kaoru has a public meltdown Daigo figures out what was going on and forgives him.

In Men's Love Daigo gets called to America by his father under the cover of work but really for an Arranged Marriage that he is trying to force on his son. Daigo tries to hide the matter from Kaoru knowing how badly he'd take it, but Kaoru finds out when Daigo's father tries to bribe and threaten him to break up with Daigo. Kaoru goes to America to force Daigo to make a decision and Daigo finally succeeds in Calling the Old Man Out.

Not to be confused with the second ending theme in Wedding Peach.