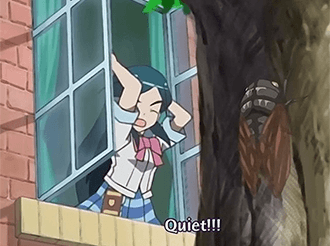 Even a Big "SHUT UP!" won't stop them.
"Japanese summers are not clear or refreshing. They're so hot and humid that you feel like you're going crazy. Then you have this huge number of cicadas all making this noise at the same time. It really stands out, so if you're trying to convey the sense of it being the height of summer in a movie or an anime, you can include the sound of cicadas and everyone will understand straight away."
— Makoto Aida
Advertisement:

It is August. Or rather the last day of July to the first day of September, A.K.A: "Forgotten Summer Vacation Homework time".

How do we know? Because distinguished anime artists and sound designers show us an Establishing Shot with this green, noisy, bug-eyed bug striding a tree with the student yawning in a distant window....all the while chirping like crazy. Although sometimes we see an extreme closeup of the goggle-eyed critter in an Aspect Montage — whereupon it normally falls off the tree to show that even it has fainted from the heat.

There is more of a knowledge gap than a cultural gap between Asian and western countries. Even though they are quite common in much of the Americas, most North Americans mistake the sound of the common summer cicada for crickets, even though their calls sound nothing like each other. It's when periodic cicadas emerge that cicadas make the news, despite them being a completely different species (Magicicada). That species has synchronized its life cycle into several 13 or 17 year broods. Unlike the yearly emergence of late summer or Dog Day cicadas, magicicadas broods emerge in vast numbers in the spring along North America's east-coast. They only live for about two weeks, during which they are present en very great masse. Thus, children in some areas may never hear of cicadas unless a periodic cicada brood emerges in their area. There are even a few places where multiple broods overlap. May God have mercy on the souls of the people living there.

Most Europeans will be baffled by a cicada initially, and even moreso by their chirping noises, as they're not a common bug found in that part of the world. Many learn of cicada's for the first time through Anime (where they can be seen and heard constantly) or Video Games that feature them (usually to catch or as part of the scenery).

In the southern part of North America (particularly Texas and Mexico) and northern South America, meanwhile, cicadas are more familiar, but have a very different cultural meaning than they do in Japan. The giant species present in this region, noted for its nearly year-round presence and incessant mind-numbingly loud drone sometimes compared to an industrial pressure valve, are strongly associated with The Savage South and Southern Gothic aesthetics, an auditory metaphor for the blistering heat of the non-winter seasons when they are most active.