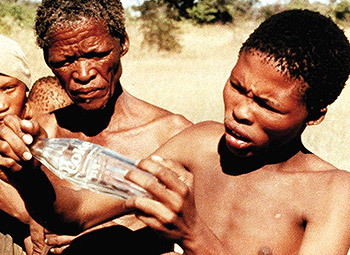 Behold, this miracle from the gods: glass!
"You do realize that if I wasn't six years old, this wouldn't interest me in the slightest?"
— Calvin, Calvin and Hobbes: The Series, "Camping Trip Part 1"
Advertisement:

A character that is oblivious to the world around him has acquired or encountered a normal, everyday object. These objects can range from umbrellas, elevators, computers, doors, kitchen sinks, mirrors... anything that could be considered mundane and common to the culture that it comes from. This is usually followed by the character exploiting or praising the particular object while being amazed by its usefulness. This can also be the Running Gag for the series.

These characters are usually one of the following:

Generally, this trope is played for comedic effect. However, in some cases, the segment will be drama. Perhaps the character had too much fun or overestimated its usefulness, destroying the item in the process. Or perhaps they just ran over a stroke of bad luck, damaging it in the process. Either way, the character will cry over the object, and the ending will be set in a Heartwarming Moments way.

Compare Incredibly Lame Fun, Easily Impressed, Far-Out Foreigner's Favorite Food and Kids Prefer Boxes. A subtrope for Mundane Made Awesome. Contrast Worthless Yellow Rocks. If the object is used to threaten, it's This Is My Boomstick.

Heartforde is the only place on Summer Camp Island that's non-magical.

Heartforde is the only place on Summer Camp Island that's non-magical.