Manga / Yona of the Dawn 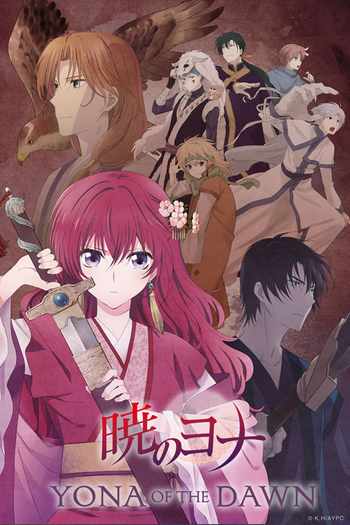 None of this really matters to Yona, the only daughter of Kohka's current King, Il. Because King Il loves her dearly, Yona has lived a very sheltered and pampered life. Truth be told, Yona's only concerns are about taming her wild red hair, getting her bodyguard, Hak, to take her seriously, and one day marrying her beloved cousin, Su-won.

This peaceful life is upended on her sixteenth birthday when Su-won kills her father and frames Hak as the murderer. Now that the palace is hostile territory, Hak flees with Yona to his hometown of Fuuga. During their stay, they learn that a priest who lives nearby could potentially help them. When they meet him, the priest tells Yona a prophecy related to her and her country's future. He advises her to find the four dragons from Kohka's founding myth, for not even Hak can protect her on his own forever.

Determined to live and fight, Yona and Hak begin their journey to find the dragons and keep Kohka from falling to ruin.

Yona of the Dawn (暁のヨナ, Akatsuki no Yona) is a fantasy shōjo manga by Mizuho Kusanagi. It began serialization in Hana to Yume in 2009, and is currently ongoing. Viz Media is in charge of the English release.

Studio Pierrot produced a 24-episode anime adaptation, which aired during the Fall 2014 season. Funimation holds the license for the anime's English home video release. It is also available for streaming on their website and Crunchyroll's.

Alternative Title(s): Akatsuki No Yona, Yona Of The Dawn