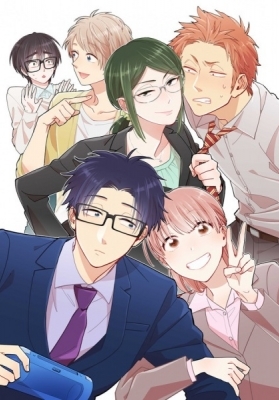 Wotakoi: Love is Hard for Otaku is a Japanese Romantic Comedy Slice of Life web-manga series written and illustrated by Fujita, first posted on Pixiv on April 17, 2014, and gaining enough traction to be published in printed Manga on April 30, 2015. The manga ended on July 16, 2021 with eleven volumes, but received a spinoff epilogue in 2021.

Two Childhood Friends reunite at work after not seeing each other since middle school: one is into Otome Games, Manga, Idol Singers and Boys' Love, while the other is hardcore gamer. Both are Otaku in their respective ways, so it's a match made in heaven, right?

Well, it's a learning curve for the spirited, self-conscious Narumi Momose and the much more laidback Hirotaka Nifuji. Narumi's Otaku status actually repelled her last boyfriend/co-worker, so much so that it even drove her to quit her previous job. She's trying to stick it out in her current position without anyone discovering her covert Fujoshi side, but Hirotaka and even a couple of her other co-workers (who happen to be High-School Sweethearts and Otaku in their own right) figure it out pretty quickly. From there, it's up to Narumi and co. to figure out how to balance their adult work and romantic lives with their socially frowned-upon interests.

A 2018 Animated Adaptation by A-1 Pictures premiered in April on the noitaminA programming block, while a live-action musical film starring Mitsuki Takahata and Kento Yamazaki was announced in 2019 and released in February 2020. Meanwhile, three Original Video Animation episodes coincided with the release of the seventh, tenth and final volumes of the Manga.