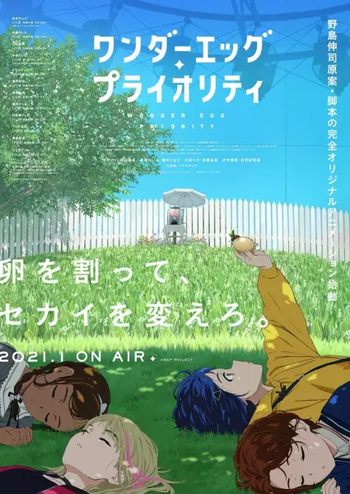 Wonder Egg Priority is an original anime series created by CloverWorks. It is the directorial debut of animator Shin Wakabayashi, and premiered on January 12, 2021. In America it is licensed by Funimation.

While on a night walk, 14-year-old Ai Ohto buries a dead firefly, who reanimates and acts as her guide to acquire an egg from a capsule machine. Ai is told that the egg is key to finding what she desires the most: a friend. After realizing what happens when the eggs break, Ai discovers that in order to receive her innermost desire, she must save as many people as she can through the eggs.

For an anime with a similar concept, check Black★Rock Shooter, has a similar premise but with a much more defined early 10s emo aesthetic.