Manga / Welcome to the Ballroom 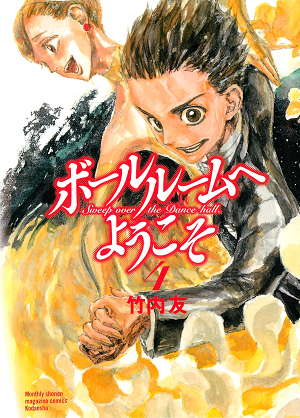 Tatara Fujita is a young, ordinary Japanese student who wishes he had an activity he could excel in or simply be good at, in order to improve his meek personality. On the way back from school, he gets approached by a bunch of bullies who try to extort him, but is rescued by a young man called Kaname Sengoku. Sengoku turns out to be a professional ballroom dancer, who is interested in recruiting Tatara to the Ogasawara Dance Studio. He reluctantly accepts to take a few classes, but takes a step further into the competitive and entrancing world of ballroom dancing, inspired by one of the studio's other pupils, the beautiful dance prodigy Shizuku.

Welcome to the Ballroom (Ballroom e Youkoso; ボールルームへようこそ ) is a manga series, written and illustrated by Tomo Takeuchi, which has been running in Monthly Shonen Magazine since 2011. It has been licensed in North America by Kodansha Comics USA, with its first volume released on September 27, 2016.

by Production I.G ran during the Summer 2017 Anime season.

Not to be confused with the weekly manga Straighten Up! Welcome to Shika High's Competitive Dance Club, though that series also focuses on dancesport.

As this page is recent, any help will be much appreciated.