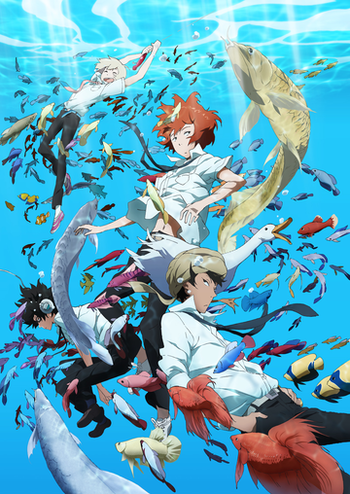 You can't catch fish if you don't go fishing, and you can't make friends if you don't at least try. Relationship-challenged student Yuki happens to find himself on a fishing trip to a small island with three other boys he doesn't know particularly well. These include another boy, a grown man and Haru who claims he's an alien. Natsuki is constantly stewing and mysterious Akira are not prospects for good companions. Fishing, however, is a unique activity that offers quiet sense of companionship and hopeful expectation, and it might bring some personal connections to Yuki. In addition, Haru says they're going to have to save the entire planet.

Can be watched at Crunchyroll

or The Anime Network

(subbed or dubbed) if you're in the available region.