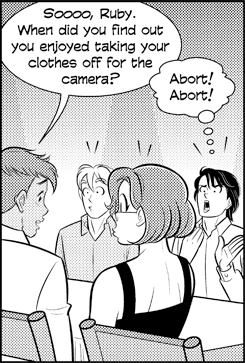 "Have you ever said something that was so bad- and I mean, you knew it was bad as it was coming out of your mouth? And you're trying to stop it, but it's too late, it's already out, and you're like, Nooooo...! And it's too late!"
— Gabriel Iglesias

A character says something inappropriate or embarrassing to the wrong person or within earshot of the wrong person. They wear fur in the presence of an overzealous animal lover. Or eat peas with their knife. And now the eyes of the world are upon them, sneering and/or laughing contemptuously at their little (or not so little) faux pas.

A faux pas can be defined as "a social blunder" or "a violation [intentional or not] of accepted social rules or norms". It can be a Freudian Slip, it can put The "Fun" in "Funeral", it can result in someone saying "How Did That Get in There?" It could even be something as simple as tripping and falling ("faux pas" literally means "false step"). And it is, 99% of the time, played for comedy in fiction.

Funny Foreigners and Fish out of Water are particularly prone to this. You can only hope and pray that those around you will have the good grace to refrain from lining up and rubbing your face in it. Speaking of grace, this trope also comes into play when a character is saying grace before a meal, alongside another character or characters who have already begun eating food.

This trope has no connection whatsoever to the webcomic Faux Pas (which is actually pronounced "Fox Paws", unlike the French, which is more to the effect of "foe pah").

Subtropes may include one or more of the following:

See also Forgot About the Mind Reader, where the character doesn't even have to speak. I Meant to Do That is when the character pretends the blunder was in fact done on purpose in order to mitigate the embarrassment. Compare Protocol Peril, which is what happens when a particular faux pas is treated as a life or death matter.