I Meant to Do That 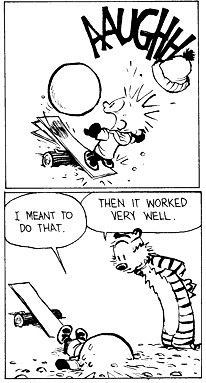 From a kitten's book of etiquette, this lesson I take
You don't have to be embarrassed when you make a mistake
You pull yourself together, and you brush off your hat,
And tell the watching crowd, "you know, I meant to do that!"
— Catherine Faber and Arlene "Callie" Hills, "I Meant to Do That"
Advertisement:

A spill or tumble can be quite embarrassing if there are witnesses.

How to reduce the humiliation? Turn it into a stunt. Claim it was intentional, a show for their benefit.

The most common subversion to a pratfall, an I Meant To Do That typically involves the clumsy character either managing to land on his feet (despite all odds) or springing up unhurt immediately after a fall.

There is a bit of Truth in Television to this: if you trip up while walking, people are less likely to notice if you just keep walking afterward without looking sheepish or saying "whoa". Oh, they'll probably still snicker, but not as much. It is also a house cat's standard method of preserving dignity.

Some characters may create an apparent Gambit Roulette by doing this, claiming random events to be all part of their plan.

This trope can sometimes be used in less comedic circumstances, such as in a Fight Scene. Compare All Part of the Show, Exactly What I Aimed At (or Accidental Aiming Skills), and Unintentional Backup Plan.

A Deliberate Flaw Retcon (and its subtrope, Parody Retcon) is what happens when an artist claims an entire work was Meant to Do That.