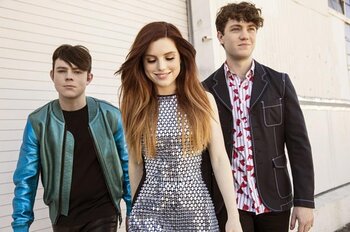 The current lineup, from left to right: Graham, Sydney and Noah.
Echosmith is a Band of Relatives from Chino, California. It consists of siblings Sydney (lead vocals, keyboard), Noah (backing vocals, bass), and Graham Sierota (drums). Oldest sibling Jamie (lead guitar, backing vocals) was also a founding member, but departed in 2016. They got their start under the name "Ready Set Go!" and became well-known for their covers of various popular songs, including "Mean" by Taylor Swift and "I Will Wait" by Mumford & Sons. Their first album, Talking Dreams, was released in October 2013, spawning hit singles "Cool Kids", "Bright", and "Let's Love".