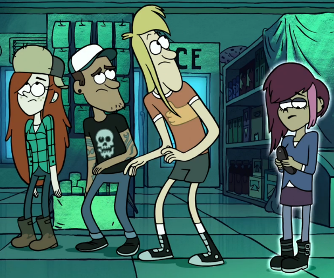 Status Update: Just got possessed by ghost OMG!!! #glowing
"Here we are
Left behind
Looking through a screen makes you feel alright."
— Echosmith, "Lonely Generation"
Advertisement:

A teenager who treats her (and it is almost Always Female) landline phone or cell phone as if it were the most important thing in the world and is on it constantly. This almost always leads to an insanely high bill. If she uses a cellphone, she may feel more comfortable texting than actually interacting with other people. When she has to babysit kids, she might not care about them. Her preferred place if the phone is wireless or a cell phone is her bedroom, and she will be invariably shown lying prone on her bed, languidly kicking her legs back and forth and/or wriggling her feet while gossiping with some female friend, or maybe her boyfriend. Rarely, she might be doing likewise at a Pay Phone, while The Hero desperately waits to use it.

When put in danger, she might treat Social Media Before Reason. Or she might find out firsthand that Cell Phones Are Useless. In The New '10s, this might include the temptation to take a selfie before even considering to put herself out of danger or taking a selfie in an inappropriate place (such as at a memorial, or on the edge of a cliff, or in a house of worship), or taking "too many" selfies (and uploading all of them to social media).

This trope is older than cell phones; it goes back to the proliferation of the home telephone. In the days before cell phones, this often involved a gag about there being only one phone in the house (or two phones on the same line where each extension could listen in on the other). This made it impossible for the poor parents to call while the Bratty Teenage Daughter tied things up. And in The '90s, when the only Internet available to residential homes was 56K dial-up, someone was trying to go on the Internet while she tied up the phone yakking with her friends or playing No, You Hang Up First with her boyfriend. For this reason, some parents would (if they could afford it) get her a dedicated phone line of her own and/or a dedicated phone line for the Internet modem.

As teenagers started moving from landlines to mobile phones for their communication, as well as internet access being replaced from dial-up modem to a separate cable or DSL line, the trope mutated into its modern incarnation, where the teenager spends every waking minute of the day texting and talking over their smartphone.

Classic trait for the Alpha Bitch, Valley Girl, Bratty Teenage Daughter, and other teenage stereotypes. Technologically Blind Elders is the flip side of this trope. Selfie Fiend is a related trope where someone loves taking photos of themself with their phone.

I Was a Teenage Stimpy

Stimpy tests Ren's patience when he goes through cat puberty.

I Was a Teenage Stimpy

Stimpy tests Ren's patience when he goes through cat puberty.