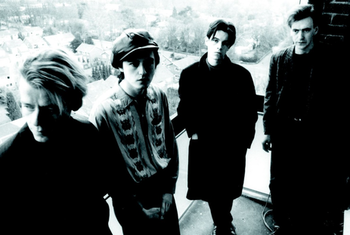 "I was a moment that quickly passed."
—Lawrence's epitaph, from the song "Black Ship in the Harbour"
Advertisement:

Felt were an Indie band that formed in Birmingham, England consisting of singer/songwriter Lawrence (no surname) alongside a ever-changing line-up. Heavily inspired by The Velvet Underground and Television, the band released ten albums and ten singles in total before disbanding in 1989, a move which Lawrence had planned in advance as the group were getting started.

Felt debuted in 1979 with the single 'Index', essentially a Lawrence solo offering. The band formed properly a year after and expanded to include guitarist Maurice Deebank - whose atmospheric, classically trained playing served as a foil to Lawrence's deadpan vocals and often oblique poetry, and the duo's chemistry defined the first half of Felt's career - and drummer Gary Ainge who managed to stay with the group up until the end. Following Deebank's departure in 1985, keyboardist Martin Duffy - currently with Primal Scream - stepped up to the fore with his melodic hammond organ arrangements, resulting in the band's sound gradually became less insular and more open and elaborate.

Outside of a minor hit with "Primitive Painters" (a collaboration with Cocteau Twins), Felt struggled to find much success throughout their existence, in part due to the often baffling creative and finanical decisions made by Lawrence. Overtime however, their cult status and influence on subsequent bands has flourished (Jarvis Cocker, The Charlatans, Manic Street Preachers, Saint Etienne and Belle and Sebastian are noted fans/admirers), and have been reevaluated as amongst the finest groups of their era.

In the years following Felt's breakup, Lawrence resurfaced in The '90s as frontman of Glam Rock revivalists Denim, who missed out on the Brit Pop train by roughly a year, and as of late creates 'novelty' Synth-Pop under Go-Kart Mozart. As with Felt, both projects have found more favour with people who review albums than those who actually buy them, and have endured years of Development Hell, caused by Lawrence's rampant perfectionism and near-poverty status. In 2011, Lawrence became the subject of an acclaimed documentary Lawrence of Belgravia.

In 2018, Felt's label Cherry Red launched A Decade in Music, a remastering campaign of the entire Felt catalog, with all their albums available on vinyl for the first time since their original release (albeit with some major changes to production and tracklistings).