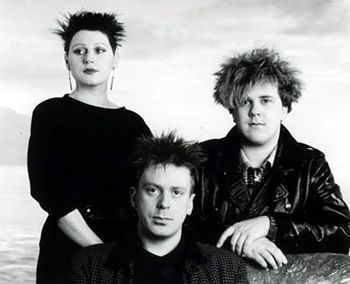 Cocteau Twins was a Scottish Alternative Rock band, known for being the Trope Makers and Trope Codifiers (along with This Mortal Coil and possibly Dead Can Dance) of the Dream Pop genre.

The band was formed in 1979 by Guthrie, bassist Will Heggie, and Fraser. They took their name from the song "Cocteau Twins" by Johnny and the Self-Abusers (who you might know under their new name, Simple Minds), which is reported to have been about two men in Glasgow, Scotland, who had a reputation for being pretentious film snobs with a fondness for the works of Jean Cocteau. They quickly obtained a record deal with 4AD Records, and their first album, Garlands, was a largely Post-Punk album heavily indebted to their acknowledged influences: Joy Division, The Birthday Party, and Kate Bush. It was an instant success.

Heggie left the band in 1983, after a tour supporting their second EP, Peppermint Pig. Undaunted, Guthrie and Fraser recorded a new album, Head Over Heels, entirely on their own with producer John Fryer. It was with this album, that the band arrived at its Signature Style: Guthrie's heavily echoed and processed guitars, combined with Fraser's powerful singing, creating an overall atmospheric sound.

Guthrie and Fraser next contributed to 4AD's collective Supergroup This Mortal Coil, being the sole players on the highly acclaimed cover of "Song to the Siren" by Tim Buckley. It was during these sessions, that they met Simon Raymonde, who joined the group shortly thereafter as bassist, and remained with them until the end of their career.

With the classic Fraser / Guthrie / Raymonde lineup now in place, the Cocteaus put out a long series of critically acclaimed albums and EPs, that continued to refine their Dream Pop style. The one anomaly in this series is the album Victorialand, which Raymonde did not contribute to, as he was busy working on the new This Mortal Coil album. As a consequence, Victorialand is a largely acoustic ambient dream pop album, featuring only vocals, reverbed guitars, and occasional saxophone (courtesy of Dif Juz member Richard Thomas).

The band also began gaining attention across the Atlantic due to constant airplay on College Radio, signing a contract with Capitol Records in 1988 for US distribution. By this point, the relationship between the band, and 4AD president Ivo Watts-Russell had soured, and he dropped them from the label, after the release of the more accesible Heaven or Las Vegas, their most commercially successful album. Tensions also appeared in the band, due to Guthrie's drug and alcohol abuse, and the end of Fraser and Guthrie's romantic relationship.

For their next move, the band signed with Fontana Records for global distribution while remaining with Capitol in the USA. Their first album for the label, Four-Calendar Café, was recorded amidst continued turmoil, with Guthrie entering rehabilitation for substance abuse, and Fraser suffering a nervous breakdown. It departed even further from their trademark complex dream pop, moving instead towards clear, conventional Alternative Rock. It drew a predictably mixed reaction. Their next album, Milk and Kisses, returned to heavily layered guitars, and incomprehensible lyrics.

The band broke up in 1997 while recording a new album, due to irreconcilable differences. All three members have gone on their own ways, with Raymonde and Guthrie focusing on producing for other artists, and recording solo albums. Shortly before the band's breakup, Raymonde and Guthrie founded the record label Bella Union, which went on to release albums by indie rock and folk acts like Fleet Foxes, Father John Misty, The Walkmen, and The Flaming Lips.

Fraser has had the most public exposure since, due to her vocal contributions to Massive Attack's song "Teardrop", and "Lament for Gandalf" off Howard Shore's soundtrack for The Lord of the Rings, but has otherwise stayed in a sort of semi retirement, only rarely releasing new material.

The band were supposed to reunite for the 2005 Coachella Festival, but Fraser pulled out for "personal reasons".