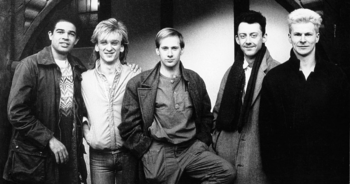 Before the retool.
Influences: Heaven 17, The Human League
Advertisement:

Fiction Factory' was a Scottish New Wave-New Romantic-Synth-Pop band from the 1980s. Today, they are only known for one of their two hit singles, "(Feels Like) Heaven", but there's a tad more to them than that. Taking influence from fellow little-known New Wave band Heaven 17, their records featured a dreamy sound that blurred the lines between New Wave, New Romantic & Synth-Pop. Featuring Kevin Patterson on vocals, Chic Medley on guitars, Graham McGregor on bass, Eddie Jordan on keyboards, and Mike Ogletree as drummer and percussionist, their first album Throw the Warped Wheel Out was released in 1984. It spawned two hit tracks, the aforementioned song and "The Ghost of Love". They split up in 1985, but not before releasing one more album, Another Story.