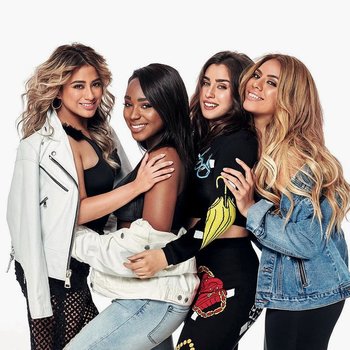 L-R: Ally Brooke, Normani Kordei, Lauren Jauregui and Dinah Jane Hansen. Not pictured: Camila Cabello
Fifth Harmony (5H) is an American Girl Group formed on the second season of the The X Factor USA in July 2012. They signed a joint deal with Syco Music, owned by Simon Cowell, and Epic Records, L.A. Reid's record label, after finishing in third place behind Tate Stevens and Carly Rose Sonenclar on the show. Since then, they have released an EP and three full-length albums.
Advertisement:

Following their exit from the X Factor, their debut single "Miss Movin' On" was released, peaking at #76 on the US Billboard Hot 100 and was later certified Gold in the US for selling over half a million digital downloads. Their debut EP, Better Together, was released in 2013 with a first week position of number six on the US Billboard 200. The following year, they won the Artist to Watch award at the MTV Video Music Awards.

In early 2015, they released their debut album Reflection which debuted in the top five on the Billboard Top 200. Their Breakthrough Hit "Worth It" (featuring Kid Ink) peaked in the top 5 in multiple countries, and hit #12 in the U.S. Their second hit "Work from Home" (featuring Ty Dolla $ign) became their first top 10 hit and ended up peaking at #4.

In 2015, rumors of Cabello wanting to go solo soon surfaced when she started recording music away from the other girls. It only amplified throughout 2016, only to be confirmed later that year. In December 2016, it was announced that Cabello had left the group for a solo career. Since then, the group has remained a foursome and have continued on successfully.

In March 2018, it was announced that the group would be taking a hiatus to focus on solo endeavors, starting in the summer 2018.

To date, the group has sold over 20 million records worldwide.