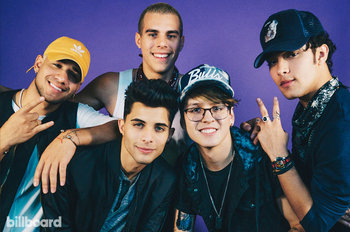 couter-clockwise from the top: Zabdiel, Richard, Erick, Christopher, Joel
CNCO is a five-member Latin-pop BoyBand formed by Simon Cowell and signed to Sony Music Latin. The group was first formed back in 2015 from popular singing-competition tv show La Banda. Being the chosen five finalists from the over two thousand contestants on the show, the boys were critically acclaimed and made a fantastic first impression with their debut single "Reggaeton Lento" which was nominated for several awards and reached over a billion views on Youtube. Their subsequent albums have also been successful, including collaborations with other well-known artists such as Yandel, Little Mix, and Prince Royce.