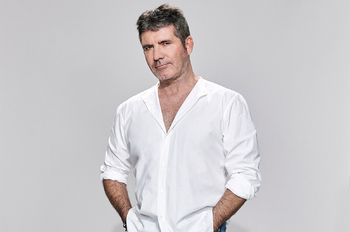 "If you've got a big mouth and you're controversial, you're going to get attention."
Advertisement:

He started off his career in the music industry working for EMI (where his father served as an executive), and later BMG, as a music producer. A few singers and groups found success with him at this time, most notably Westlife.

It was with the Idol series (specifically, American Idol), however, where he became a household name. He would go on to judge and produce many other talent shows, including The X Factor, America's Got Talent and Britain's Got Talent. He also owns his own entertainment company, Syco Music, which functions as a record label and talent agency for the many artists who find success with him.

He's famous for his blunt and critical demeanor, which is often a source of parody in popular culture.

Shows and films he's worked on: