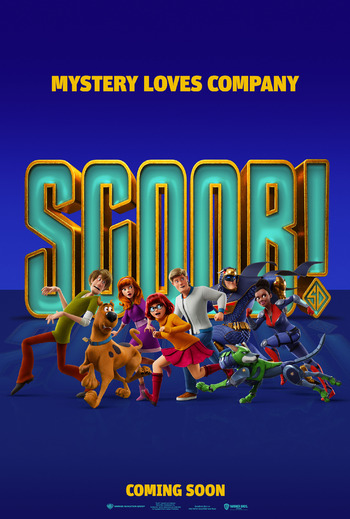 Mystery loves company.
Fred: This isn’t about some guy in a rubber mask.
Daphne: This is about one of us.

SCOOB! is a 2020 CGI animated film based on the Scooby-Doo franchise, directed by Tony Cervone (Space Jam and Duck Dodgers) and animated by Reel FX Creative Studios, and is intended to kick off a shared cinematic universe of Hanna-Barbera properties.

Ever since childhood, Shaggy (Will Forte), Fred (Zac Efron), Daphne (Amanda Seyfried), and Velma (Gina Rodriguez) have been solving mysteries together with Shaggy's dog Scooby-Doo (Frank Welker). After all those years, Mystery, Inc. is forced into their greatest mystery yet when the Blue Falcon (Mark Wahlberg) recruits Shaggy and Scooby to stop Dick Dastardly (Jason Isaacs) from using the ghost dog Cerberus to unleash a "dog-pocalypse," all while learning about Scooby's true purpose.

Other voices include Tracy Morgan as Captain Caveman, Ken Jeong as Dynomutt, Kiersey Clemons as Dee Dee Skyes, Henry Winkler as Keith, and Simon Cowell As Himself.

The film was set to be released in theaters on May 15, 2020 but due to the COVID-19 Coronavirus shutting down theaters it instead went straight to streaming

that same day, similar to what Universal did with Trolls: World Tour. A few weeks later, it was announced the film would also receive an early premiere on HBO Max on June 26th.

Not to be confused with the 2006 film Scoop.