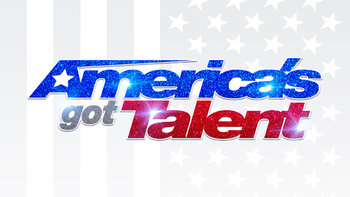 America's Got Talent is a Talent Show created by Simon Cowell which takes the American Idol concept and expands it to pretty much anything you think people will pay to see — or not, in the case of the bad acts. It was launched in 2006 and is still ongoing. People audition to win $1,000,000 and, since Season 3, a contract to perform in Las Vegas (usually via a tour featuring them and other high-ranking participants from the season). One of the main features of the show is the panel of judges who can each hit a buzzer during acts they hate, and if all judges buzz an act then it ends then and there.

Between Season 13 and 14, and again between 14 and 15; NBC aired a spinoff competition, America's Got Talent: The Champions. It featured notable contestants from past seasons plus a few from the various international versions of the show competing against each other for spots in a finale, with each episode having one or more finalists decided by an audience of "superfans" representing the 50 U.S. states and another chosen unilaterally by one of the judges or the host (with each getting one episode where they get to choose).

Another spinoff aired in 2022 after Season 16. Called America's Got Talent: Extreme, it features daredevil acts and a handful of other acts that must also by necessity perform outside. Like The Champions, it features a "superfans" audience vote instead of nationwide live voting.

Hosts and Judges
(Current cast is in bold.)

The show has been hosted by:

A few Season 5 performers, Jackie Evancho, Prince Poppycock, and Lindsey Stirling, have their own trope pages.

Britain's Got Talent is its Transatlantic Equivalent, and various other countries have their own local "Got Talent" counterparts.