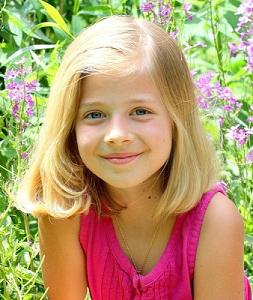 Just wait 'til you hear her sing.
Advertisement:

" and thoroughly stunning the judges and audience with her "voice of an angel." The richness of the voice has been met with disbelief that a little girl can sing so well. She had sung before, having been inspired by The Phantom of the Opera, but her appearance on AGT was what got her noticed. She finished in second place for that season of AGT but has unsurprisingly found greater success since. Her second album, a Christmas EP, topped Amazon.com's charts in pre-orders later going platinum. Making her the top debut artist of 2010. She has sung several more songs, and released the studio album Dream with Me featuring among other things a duet with Barbra Streisand. June 2011 had it debuting at #2 on the Billboard music charts.

She has made several appearances in public, such as a duet rendition of "Silent Night

" with Katherine Jenkins at Rockefeller Plaza, a performance of "The Star-Spangled Banner," and performances with various symphony orchestras. On her own she sang Oh Holy Night

at the National Christmas Tree Lighting with the President in attendance.