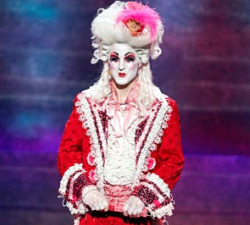 John Andrew Quale (born May 24, 1978) is a singer/songwriter, and creator of the stage character Prince Poppycock. The act started in 2006 when a friend asked Quale to sing at a nightclub in Los Angeles. The only catch was that he had to wear a wig. Cue Prince Poppycock's wild wig and whiteface makeup. Since then, Prince Poppycock has come into the world's attention when he performed on America's Got Talent.

John Quale and his stage character provide examples of:

''The Legend of Prince Poppycock''