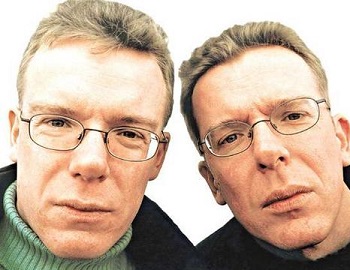 The Proclaimers are a Scottish Folk Rock band based around identical twins Charlie and Craig Reid. The group started as an acoustic duo with just the brothers before expanding into a full Rock group for their second album. They're known universally for their 1988 single "I'm Gonna Be (500 Miles)" and their thick Scottish brogues, but they've had other hits in the UK and Ireland with "Letter from America" and "King of the Road", and "I'm On My Way" was featured in Shrek. While their song subjects center around Silly Love Songs and the struggles of familial life, listeners may be surprised to find serious discussion of Scottish politics and independence.

A highly successful Jukebox Musical based on their music, Sunshine on Leith, toured Europe to great reviews and spawned an equally-lauded movie in 2013.