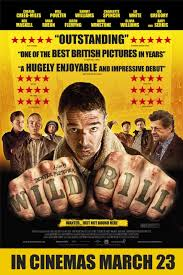 Set in east London the film follows Bill Hayward a former gangster released on parole after eight years to find his two sons Jimmy and Dean have been left by their mother to fend for themselves. Bill intends to get his life back on track but when his youngest son gets involved with a local drug dealer he must decide whether he wants to be a good dad or a free one.

Not to be confused with the 1995 film starring Jeff Bridges as Wild Bill Hickok.