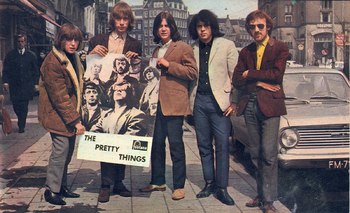 The 1964-65 lineup practices some self-promotion. Left to right: Viv Prince, Brian Pendleton, Phil May, John Stax, Dick Taylor.
"The Pretty Things embody everything that is cool and exciting about the bands and the music of the ‘60s, and rock & roll in general. There was purity to everything they did — they never seemed to be motivated by ego or a hunger for fame, they just sort of let things happen and didn’t care about the consequences. They’re still the same way, and that’s inspiring to me. There’s no compromise at all in their music, be it the early raw R&B records, the psychedelic stuff, or the more progressive records that followed. There were few other bands that could master all of those forms so definitively. There’s something about their image, their lifestyle, their attitude and their whole approach to creating music that I can identify with absolutely."
— Mike Stax of The Loons and Ugly Things magazine, from this 2012 interview

The Pretty Things were an English rock and roll band based in Londonnote the original members were all from the nearby Kent area, who formed in 1963 and remained active for well over 50 years.

Built around the core formed by lead singer Phil May and guitarist Dick Taylor, the Pretties began as a tough Blues Rock outfit often compared with The Rolling Stones (partially because Taylor was the Stones' first bassist), although they never achieved the level of fame and success that the Stones did. They signed with Fontana Records in 1964, releasing two albums (their self-titled debut and Get the Picture?) and several successful singles over the next two years in the UK. However, by 1966 the British R&B scene was decaying — and so were the band's sales. The Pretties were anxious to leave Fontana, but they owed the company one more album. The result, the 1967 release Emotions, was the product of severe Executive Meddling, as strings and horns were overdubbed onto the band's original recordings without their permission, leading to Creator Backlash.

By the end of the year, the Pretties had switched labels to EMI Columbia and evolved their style into Psychedelic Rock. In 1968, they released their Magnum Opus S.F. Sorrow, the first ever Rock Opera — yes, even before The Who's Tommy! It didn't sell well, although today it is usually regarded as a groundbreaking work of art. The next album, 1970's Parachute (on EMI's Progressive Rock imprint Harvest), continued in the psychedelic/art rock vein and received rave reviews. It didn't sell either.

Still failing to attain much popular success, the Pretties recorded a few more albums before disbanding in 1980; two of these, Silk Torpedo and Savage Eye, were originally released on Led Zeppelin's Swan Song label and were their only albums to chart in America. They went on to reunite several times and release further critically acclaimed but commercially unsuccessful albums. May and Taylor toured with a new lineup until they retired from the road in 2018. Also, a group called xPT's, consisting of several former Pretties (not including May or Taylor), released Parachute Reborn (a re-recording of Parachute with a couple of bonus tracks) in 2012.

Phil May died in 2020, bringing an end to the long story of The Pretty Things. They leave behind a following who regard them (along with contemporaries like The Creation and The Move) as one of the great lost bands of The British Invasion — a group who were never as successful as they deserved to be, but stayed true to themselves throughout their long career.