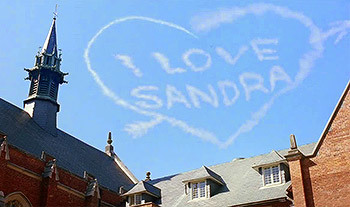 "The sky is my canvas."
Beast: I want to do something for her... but what?
Cogsworth: Well, there's the usual things: Flowers... chocolates... promises you don't intend to keep...
— Beauty and the Beast
Advertisement:

You've got a lover. You love them so bad it hurts. You want to do something to prove your love. But what?

Well, whatever it is, it should be big. Jewelry doesn't cut it, flowers are for losers, and chocolates? Are you kidding?

Grand Romantic Gestures occur when someone gives elaborate gifts or stages outlandish events in an attempt to be romantic. Sometimes it works, sometimes it backfires. The path to true love never did run smooth, after all.

Runs heavy on Rule of Romantic. In Real Life, be warned: this has appeared on lists

in the lines of "stupid things movies taught us would work," particularly if you're not already in a relationship with them, and double-especially if they're not interested and the gesture is supposed to change their mind; doing something stupidly, outrageously romantic for your established significant other is very different from doing it for someone you aren't even dating, and the latter is liable to be massively awkward. (See also: stalking.)

Contrast The Simple Gesture Wins, and Act of True Love, where love is shown by sacrifice.