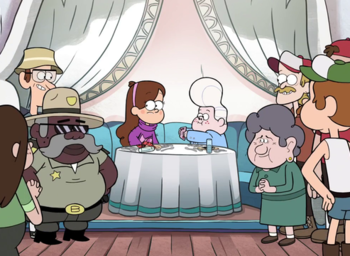 Hey Mabel, wanna go on another date with Gideon? No pressure or anything.

The fourth episode of Gravity Falls.

An alleged psychic called Li'l Gideon has come to town and Soos, Dipper, and Mabel go to see his show against Grunkle Stan's wishes. The psychic turns out to be a little kid who fails to demonstrate any actual powers in his show (besides making the twins and Soos stand up inadvertently), leaving Dipper unimpressed. Li'l Gideon and Mabel start hanging out, and soon Gideon is asking Mabel out for a real date. Mabel is reluctant, wanting to remain friends, but agrees to one date so her new friend won't be sad. She keeps getting pressured into more dates and becomes increasingly distressed by her inability to return to just being friends until Dipper offers to break things off with Gideon for her. Dipper breaks the news to Gideon, who claims not to be upset. Later, Li'l Gideon lures Dipper into a trap and reveals that his lucky bolo tie amulet grants him supernatural powers. He tries to eliminate Dipper, whom he sees as being in the way of him and Mabel being together. Mabel arrives just in time to save her brother, smashing Gideon's power source. Li'l Gideon vows revenge and leaves. As the Pines family mock Gideon, confident he can't do anything to harm them, the child is plotting against while poring through a book—one exactly like Dipper's journal, but marked 2.