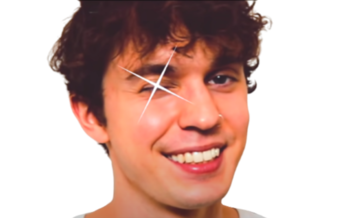 "If I could make my eye make that sound when I wink, I'd be like, winking all the time! They'd call me Wink Martindale."
— Homestar Runner, Strong Bad Email #66 "the show" DVD commentary
Advertisement:

When a character winks, there's an audible "DING" sound, like that of a metal triangle, to accompany it. It's mostly done in North American cartoons, but it's been seen in anime and even live-action.

This is often used to bring extra attention to the wink, hence its common usage when a character is trying and failing to be secretive. Nobody outside of the viewer will ever be able to hear the ding, though.

Wink dings are also so inherently cheesy that they are very often used in a parodic manner. Expect to hear them whenever a character winks at the camera, especially during a theme song or character introduction. Extremely attractive characters will often wink with a ding sound to show their outer sparkle, usually towards the main character or other hopelessly-lovestruck bystanders. Especially cheesy examples will be accompanied by a visible twinkle. Note that they are almost always Played for Laughs; serious characters only wink silently. Examples in anime (and animesque works) tend to have a star shooting out of the eye,

and are often an indicator of cutesiness in a character.

Not to be confused with Wing Ding Eyes.

When Ying runs past Probe, who shot sleeping gas homing missiles towards her, a ding can be heard as she winks in slow motion, moments before Probe is hit with his own missiles.

When Ying runs past Probe, who shot sleeping gas homing missiles towards her, a ding can be heard as she winks in slow motion, moments before Probe is hit with his own missiles.