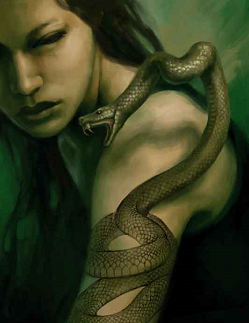 This is a tattoo that is actually its own living creature. Sometimes it is a two-dimensional animated being who is restricted to the surface it's inscribed upon, but other times it can leap off that surface and interact with the outside world as its own physical being.

For when the pigment's on a canvas and not skin, try Living Drawing. See also Art Initiates Life and Power Tattoo.