Film / In the Heights 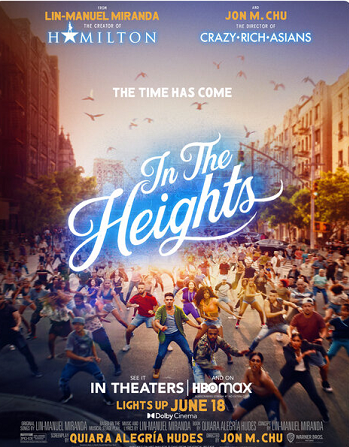 "From Puerto Rico to Santo Domingo, we rep our people and the beat go —"
"Sueñito? It means 'little dream'."
— Usnavi
Advertisement:

In the Heights is a 2021 romantic comedy-drama film based on Lin-Manuel Miranda's Broadway musical of the same name. It was directed by Jon M. Chu from a screenplay by Quiara Alegría Hudes (who also wrote the book for the original musical).

The film is about a tight-knit Latino community on the brink of change located in Washington Heights, New York. Anthony Ramos stars as Usnavi, a good-hearted bodega owner who dreams of returning to his native Dominican Republic despite his crush on aspiring fashion designer Vanessa (Melissa Barrera). Leslie Grace plays Nina, considered the pride of the barrio for getting into Stanford, while Corey Hawkins plays Benny, Usnavi's best friend, Nina's love interest, and an employee of her father Kevin (Jimmy Smits). Rounding out the cast are Gregory Diaz IV as Sonny, Daphne Rubin-Vega as Daniela, and Stephanie Beatriz as Carla, with Olga Merediz reprising her Tony-nominated role as Abuela Claudia and Miranda as Piragua Guy (named "Mr. Piraguero").

The film was released via simultaneous theatrical and HBO Max on June 10, 2021. Trailer 1

Example of:
Adapted Out