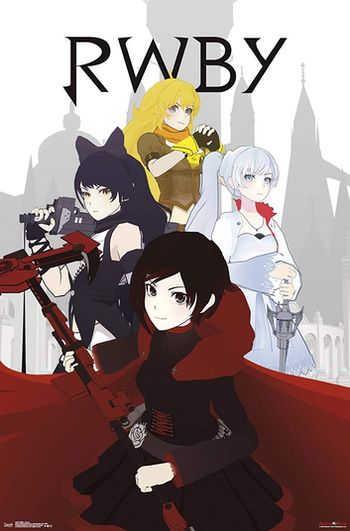 "Tomorrow, your initiation begins. Be ready."
Clockwise from bottom Ruby Rose, Blake Belladonna, Yang Xiao Long, and Weiss Schnee.
"You have travelled here today in search of knowledge, to hone your craft and acquire new skills. And, when you have finished, you plan to dedicate your life to the protection of the people. But I look amongst you and all I see is wasted energy in need of purpose, direction. You assume knowledge will free you of this, but your time at this school will prove that knowledge can only carry you so far. It is up to you to take the first step."
— Professor Ozpin, "The Shining Beacon"
Advertisement:

(pronounced "Ruby") is an Animesque CGI animated series created by Monty Oum and produced by Rooster Teeth. It is also Rooster Teeth's first original IP and has since expanded into a multi-media franchise.

Once Upon a Time, in a world known as Remnant, mankind became the target of the "Creatures of Grimm": malevolent creatures that are attracted to negative emotions and who emerged from the darkness to attack humanity for reasons unknown. To fight back, mankind used a mysterious energy source known as "Dust" to not only drive back the Grimm but catalyze the growth of civilization across the planet.

In the present day, Huntsmennote the term itself is gender-neutral, but a feminine form ("Huntress") exists are trained in special schools to harness the Dust and become protectors of the peace. One such trainee, an idealistic girl named Ruby Rose (Lindsay Jones), is scouted by the elite Beacon Academy and allowed to skip two years' worth of training to attend. Once there, she is placed into a team with three other students: Yang Xiao Long (Barbara Dunkelman), her boisterous big sister; Weiss Schnee (Kara Eberle), the proud heiress of the Schnee Dust Company; and Blake Belladonna (Arryn Zech), a mysterious and aloof girl. Though initial tensions are high, the forces of darkness are preparing to return and the four girls must learn to work together to survive.

The four main characters were introduced one at a time in four trailers: Red

(Yang Xiao Long), to much anticipation and speculation. The series premiered on Rooster Teeth's official website on July 18th, 2013. The first season, or "volume", ran for sixteen episodes.note Due to the varying episode lengths, some were condensed for the DVD release, bringing the episode count to 10.

During volumes, new episodes are released weekly on Rooster Teeth's website (Saturdays for Rooster Teeth First members and a week later for normal account users), with episodes of a miniseries called World of Remnant dedicated to giving more information about Remnant sometimes being published in between episodes. The series is also being simulcasted on Crunchyroll

, and the first episode is available on YouTube. Home video releases are also available from Rooster Teeth's United States

online stores. A Japanese dub was produced by Warner Bros.

After Monty Oum tragically Died During Production on February 1, 2015 due to an allergic reaction ten days earlier, the creative team announced they had the required information to carry on with the series. True to their word, on October 15th of that year, Rooster Teeth released the intro animation of Volume 3

, which premiered a week later. The series consists of eight completed volumes, with the most recent one airing from November 7, 2020 to March 27, 2021. A ninth volume is in development, slated to release in 2022.

Note that the vast majority of these pages have no spoiler tags. Please read at your own risk.

"But perhaps victory is in the simpler things that you've long forgotten... things that require a smaller, more honest soul."
Feedback