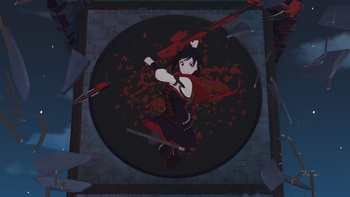 Looks like someone's been hitting the milk.
"But you're still here, despite everything you've lost, everything you could still lose, you chose to come out here. Because you felt like you could make a difference. You didn't drag us along. You gave us the courage to follow you."
— Jaune Arc to Ruby Rose
Advertisement:

It was created by Monty Oum, man. Of course RWBY will have lots of badass moments.

The Shining Beacon Parts I and II

The First Step Parts I and II

The Emerald Forest Parts I and II

The Badge and the Burden Parts I and II

Jaundice Parts I and II

Forever Fall Parts I and II

Brawl in the Family

World of Remnant: The Great War