Expect unmarked spoilers on these pages for Volumes 1-7. 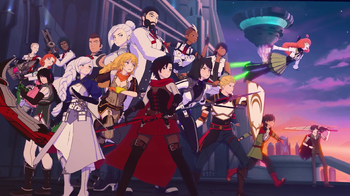 "It's been hard, on all of us, and I'm not just talking about the monsters we fought out here." note From left to right: Vine Zeki, Nora Valkyrie, Lie Ren, Marrow Amin, Weiss Schnee, Clover Ebi, Winter Schnee, Yang Xiao Long, General James Ironwood, Ruby Rose, Harriet Bree, Blake Belladonna, Elm Ederne, Jaune Arc, Oscar Pine, Penny Polendina and Qrow Branwen.
Advertisement:
First Members see episodes 1 week before public release. As a courtesy, please do not trope them for 1 week until they have been released to the general public. Please only trope the episodes that have been released to the general public. For more information, please visit the RWBY Forum thread.Characters for Monty Oum and Rooster Teeth's RWBY.

There are some franchise works that might use these character pages due to confirmation by the creators that their content is as consistent with canon as is feasible. Discretion when troping those works is advised as they may still have certain contradictions with the main show that shouldn't be troped here. However, the majority of the franchise works will use their own character pages.