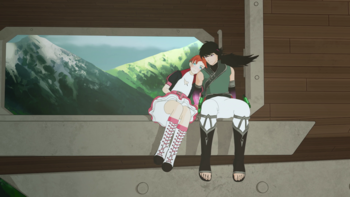 I don't know what path we will be shown,
but I know that when I'm with you I'm at home.
Ruby was right. We're here to make the world better. Even if the show is known for having a lot of horrid and cruel moments, there are always nicer, kinder things to look forward to.
Advertisement:

The Shining Beacon, Parts I and II

The First Step, Parts I and II

The Emerald Forest, Parts I and II

The Badge and The Burden, Parts I and II

Jaunedice, Parts I and II

Forever Fall, Parts I and II

It's Brawl in the Family

The End of the Beginning

World of Remnant: The Four Maidens

Volume 4
The Next Step