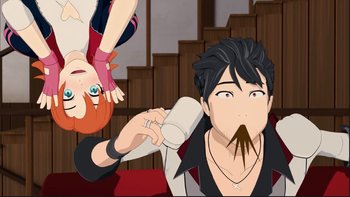 open/close all folders
Trailers / Character Shorts
The trailers have been more awesome than funny, but there are still some moments:
Advertisement:

The Shining Beacon, Part I

The First Step, Part I

The Emerald Forest, Part I

The Badge and the Burden, Part I

The Badge and the Burden, Part II

It's Brawl In the Family

Dread In The Air

The Enemy Of Trust