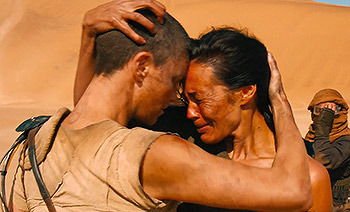 When you find a friend in a state of great emotional distress, the appropriate response is a three-step process:

Both males and females are welcome to take part in this trope, but it's rare for a male character to be a recipient from a female, probably because he's usually taller. This pose is also handy so two can be close to each other without obscuring faces from the camera.

Subtrope of Affectionate Gesture to the Head. See Headbutt Thermometer for when foreheads touch to check the temperature. Compare Anywhere but Their Lips and Non-Standard Kiss.