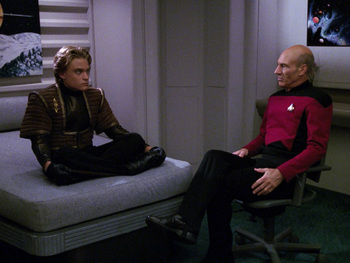 "So, um, encountered any Klingons or Cardassians lately?"
Advertisement:

The Enterprise responds to a distress signal from a damaged Talarian ship. They are nervous to lend aid because the Talarians are a ruthless and militaristic people who relatively recently went to war with the Federation. Picard decides to risk it, and the away team finds a number of wounded Talarians as well as a human teen boy.

The human boy, Jono, turns out to have been raised by the Talarians as one of their own from an early age, to the point that he does not recognize himself as human. He treats the human crew of the Enterprise with derision until Picard arrives, and Jono's rigid upbringing forces him to respect the authority of a captain. Still, Jono insists that he be returned to his own Talarian captain as soon as possible.

Crusher discovers that Jono has received critical injuries in the past few years and suspects that the Talarians have been abusing him. She strongly urges Picard to keep Jono out of the hands of his abusers, even if his values have been twisted to accept them as his family. Picard also learns that Jono's closest human relative is a highly respected admiral from a long line of great Federation officers. He is torn between ripping Jono from his adopted family and "saving" him from them.

When the Talarians arrive to pick up their lost crewmen, the captain, Endar, reveals that he has adopted Jono as his son. He also explains that Jono's injuries were not abuse but a simple accident from when the boy tried a daring stunt to impress him. When Picard delays returning Jono along with the other Talarians, Endar states that he will go to war if his son is not returned soon.

Picard takes Jono under his wing and tries to get him acquainted with his human heritage, hoping that if Jono chooses to remain with the Federation, Endar will respect the decision and not attack. They play sports, eat ice cream, socialize with the crew and watch a video from his human grandmother. Conflicted, the boy closes out the day by stabbing Picard in his bed, nearly killing him. When confronted about his deed, Jono states that he would rather die than allow who he is to be torn away from him.

As Endar's ultimatum reaches its conclusion and he readies an attack on the Enterprise, Picard returns to the bridge and admits his error, saying that in trying to decide what was best for Jono, he never considered Jono's feelings. He returns Jono to his father, and the two part on good terms.