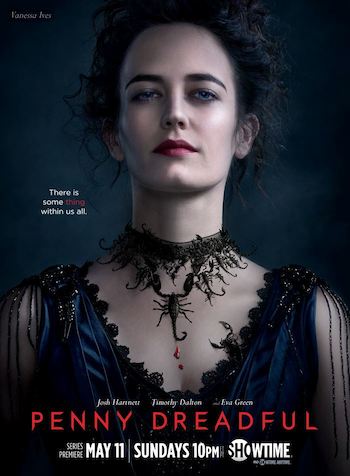 "Do you believe there is a demimonde, Mr. Chandler? A half-world, between what we know and what we fear? A place in the shadows, rarely seen but deeply felt? That's where we were last night, where some unfortunate souls are cursed to live always... if you believe in curses, that is."
— Vanessa Ives, to Ethan Chandler, "Night Work"
Advertisement:

Penny Dreadful is a Gothic Horror series created by John Logan that premiered in 2014 on Showtime in the US and Sky Atlantic in Britain (the series is a co-production between the two). Taking place in 1891 Victorian Britain, the series weaves together various Public Domain Characters from classic horror literature in a story about the supernatural. It stars Eva Green, Timothy Dalton, Josh Hartnett, Billie Piper, and a slew of other familiar faces.

Very well-received critically, after the season three finale aired on June 19, 2016, Logan announced that Penny Dreadful had ended, as the main story had reached its conclusion.

...Only to announce four months later, on October 31, 2016, that Penny Dreadful would live on as a comic book series called Penny Dreadful: Awaking. Chris King, the show's co-producer, worked on the the comic series. Set six months after the TV finale, it centers on Ethan Chandler, who is finding it difficult to move on in the aftermath of the events of the series.

A comic book Prequel series called Penny Dreadful about Sir Malcolm Murray and Vanessa Ives rescuing Mina from the clutches of a sinister “Master” vampire was published in 2016.

A Spin-Off series, Penny Dreadful: City of Angels, set in 1930s Los Angeles and "infused with Mexican-American folklore and social tension", was announced on November 1, 2018 and premiered on April 26, 2020. It was cancelled after one season.

See here for a recap page.