Anime / DARLING in the FRANXX 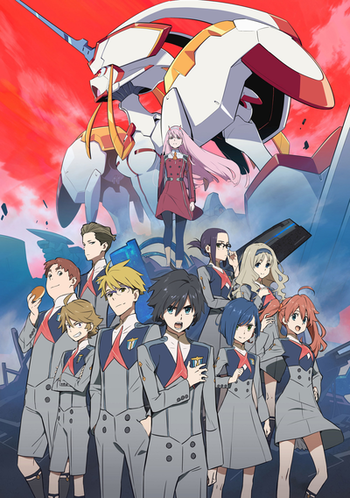 In a distant future, humanity lives within fortified mobile bases called "Plantations", under threat from strange creatures called Klaxosaurs. Klaxosaurs are drawn to Magma Energy, a substance mined from deep beneath the Earth's crust to fuel the Plantations. To combat the Klaxosaurs, the human race rely on young children who pilot Giant Mecha called FRANXX which are armed with Klaxosaur-killing weapons. These children are instructed from on high by "Papa" to kill the Klaxosaurs and protect humanity. For these children, this is their reason for being. They know nothing of freedom or joy or love. They don't even have names, only code numbers. They exist to pilot FRANXX and give their lives so humanity can thrive. When not needed in battle, they are confined to their "birdcage" within the Plantation until the next battle.

Code:016, a member of Squad 13, is unique among these children for two reasons: One: He gave himself a name "Hiro" and he has subsequently given names to all his squadmates, and two: He is incapable of piloting a FRANXX, even with a willing female partner. Because of this, he believes there is no reason for him to exist. He spends his days wallowing in self-pity until the day he crosses paths with a beautiful naked girl with long pink hair and short red horns. This girl, Code:002 "Zero Two", quickly takes a liking to Hiro and asks him to be her "Darling". From this simple chance encounter, a story of love, loss, separation and reunion unfolds, forever changing the lives of both Hiro and Zero Two, the rest of Squad 13 and humanity as a whole.

DARLING in the FRANXX is a 24-episode Humongous Mecha anime series directed by Atsushi Nishigori, with mech designs by Shigeto Koyama (of Star Driver fame) and is a co-production between Studio TRIGGER and A-1 Pictures. Best characterized as a Coming-of-Age Story and Teen Drama in the Super Robot genre, it premiered on January 13, 2018 and concluded July 7. A manga adaptation drawn by Kentaro Yabuki (Black Cat, To Love Ru) is in simultaneous production for Shueisha's Shonen Jump+ website; it initially follows the anime's story before deviating later on.

There's also an official Yonkoma by mato, DARLING in the FRANXX!. It's viewable in both their official Twitter and Shonen Jump+ website.

The series is licensed by Crunchyroll and Funimation, the latter giving the series a simuldub.

DARLING in the FRANXX contains examples of: