Anime / Daphne in the Brilliant Blue 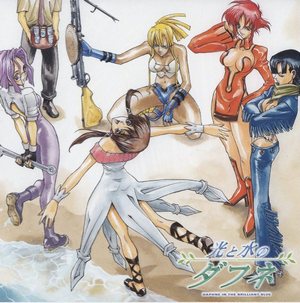 "A tree planted near the water bears fruit, but only when its time is right.
Its leaves won't ever wither, and it brings prosperity to all."
— Maia Mizuki
Advertisement:

In an unspecified future year, long after global warming has inundated the world, a young girl named Maia Mizuki is expecting to get a job at the prestigious Oceans Agency. She's an obvious shoo-in for one of the limited number of positions available, having passed the grueling qualifying exam (which is offered only once a year) with flying colors. But she is inexplicably rejected and within days finds herself not only jobless but homeless, too. An amnesiac orphan whose only living relative, her grandfather, died shortly before, Maia has no one to turn to, and faster than she can comprehend she finds herself stumbling penniless (thanks to a pickpocket) through the seedier side of the city she's lived in all her life. And just when it seems like things can't get worse, a criminal takes her hostage and she is shot by the women chasing him.

Maia comes to some hours later on the couch of Nereids ("Neres" in the original Japanese), a troubleshooting agency which is staffed by the women. Manipulated into helping with their case against the criminal and her brother, Maia shows quick wit and ingenuity in the field and soon finds herself offered both a job and a place to live at Nereids. Although her days seem to alternate between boring scut work and life-threatening danger, and her coworkers are often rude and volatile, Maia (to her surprise) starts to find a certain satisfaction in her job — although she is intent on reapplying to the Oceans Agency when the next set of positions open up in a year's time.

When a company vacation to tropical Siberia Island seems to awaken memories she had thought forever lost, Maia begins to wonder what secrets her forgotten past holds, and what they may do to her hopes for the future.