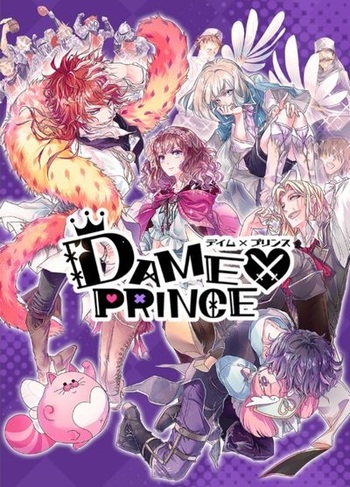 Clockwise from top left: Narek, Ani, Ruze, Vino, Mare, and Gurimaru.
Once upon a time, there were three kingdoms: the small, rural Inaco, the militaristic Milidonia, and the religious Selenfalen. They lived in harmony, until one day word comes that Milidonia was going to invade Inaco! To make things worse, the king of Inaco is injured, leaving Inaco with very little protection. In order to prevent this invasion, the queen of Inaco commands her daughter, Ani (also the protagonist), to head out and do something about it, by either going to Milidonia and convincing them to stop the invasion, or to go to Inaco's old ally Selenfalen and ask for support.
Advertisement:

In both countries, she will meet some truly eccentric princes, who she will have to get close to in order to get their help. Will she be able to win them over and protect Inaco...?

Dame x Prince is a mobile Otome Game published by NHN PlayArt, released in 2016. Unlike many of the female-oriented mobile games released around that time, the game's main story works on a route system where each character has their own route, with three separate endings for each. It also has a "caravan" system where you can earn money for unlocking the stories in the routes, as well as earn points for events. And most humorously, the game enables you to make comments that fly across the screen, Niconico-style, when you reread the stories. The mobile game ended up shutting down in 2019.

It has a 4-koma manga serialized online, and an anime adaptation under the name of Dame x Prince Anime Caravan was aired during the Winter 2018 season.

The game provides examples of these tropes:

Tropes from the Animated Adaptation: