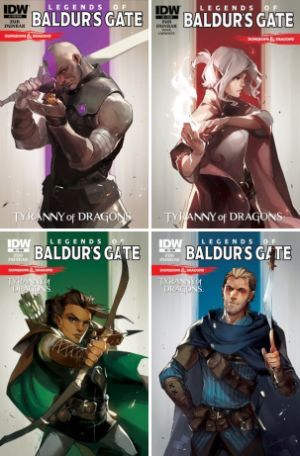 Top: Minsc (with Boo, of course) and Delina. Bottom: Shandie and Krydle.
Advertisement:

Legends of Baldur's Gate is a Comic Book spin-off of the Baldur's Gate video games, themselves part of the Forgotten Realms setting.

The comics feature writing by Jim Zub and art by Max Dunbar. There are five issues in the series, and the story ties into the wider Tyranny of Dragons storyline (which spread across multiple media). The comics were published from October 2014 to March 2015.

The story follows the moon elf Delina, who comes to the city of Baldur's Gate looking for her twin brother, Deniaj, after feeling a terrible darkness through the mystical bond they share. Upon arrival, however, she is attacked by a couple of gargoyles, and in her attempts to defend herself brings back the Beloved Ranger, Minsc. After a couple of rogues, Shandie and Krydle, help them evade the city guard, the group will have to navigate a city under attack by the secretive Cult of the Dragon.

The party consists of:

The comics provide examples of the following tropes: