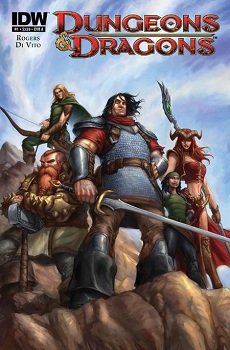 This is just going to be the start of a really bad day.

Hasbro and IDW Publishing seem to work well together. Their professional relationship started with the highly successful Transformers comics, which have varied in quality from the mediocre The Transformers: All Hail Megatron to the critically praised The Transformers: Last Stand of the Wreckers, and continued with G.I. Joe comics. So naturally, the next step was for Hasbro to choose another popular franchise that could translate well into the comics medium. The obvious choice was Dungeons & Dragons.

Written by John Rogers of Blue Beetle and Leverage fame, Dungeons & Dragons tells the story of Fell's Five, a Ragtag Bunch of Misfits consisting of:

The series generally runs on Rule of Fun and Rule of Cool, and often reads as much like as a bunch of creative players playing their characters as it does an actual story — it's another success story in IDW's creative partnership with Hasbro.

Much like IDW's My Little Pony titles, it isn't part of the Hasbro Comic Universe formed by the Revolution; in this case it's likely because bringing them from their own world into the HCU would be too difficult.

Based on the 4th edition ruleset of the games, the comic takes place in its own version of the Nentir Vale setting.

Dungeons And Dragons contains examples of the following tropes: