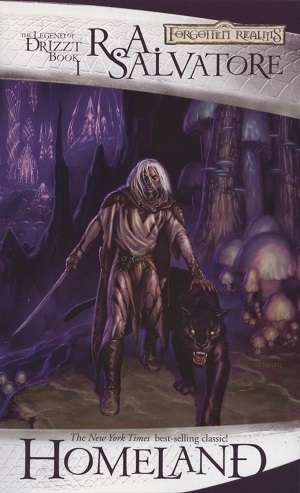 The Dark Elf Trilogy is a prequel series of books by R.A. Salvatore that describes the life of Drizzt Do'Urden, a young dark elf who starts his life in the drow city of Menzoberranzan. He being the third born male child (and thus due for ritual sacrifice immediately after birth), his mother, Matron Malice Do'Urden, spares him after his eldest brother is killed by second brother Dinin to gain in rank.
Advertisement:

In Menzoberranzan, and in drow society as a whole, ascension to a higher rank is gained not by merit, but by strength — if you can live long enough to kill those that outrank you, you gain rank and prestige. As long as it's done on-the-sly, and nobody remains to accuse you.

The drow place very little value on life — children are set up as pawns in dangerous training exercises, the Academies of the city teach outright racism and genocide, and anyone who is not drow (and occasionally, not drow enough) is quietly executed before they can become a liability.

Unlike others of his race, Drizzt is honorable and kind, a mindset which clashes violently with that of his vicious kin. At first, Drizzt refuses to acknowledge that such evil can exist unpunished, but is eventually forced to confront (and question) his nature after his family's various schemes almost force him down the same dark path.

Upon leaving his homeland, Drizzt spends several years roaming the Underdark (a massive series of caverns and tunnels that span from one end of Faerun to another) before befriending a deep gnome and finding his way to the surface.