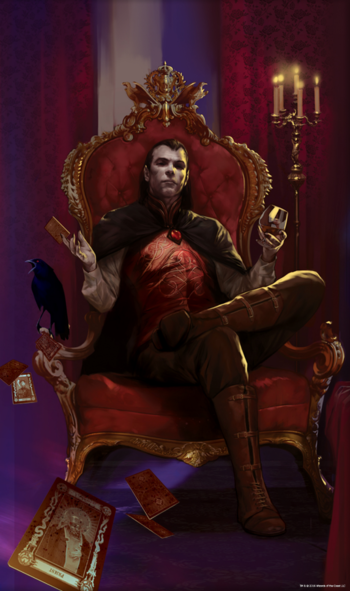 Bound by fate.
"I am the Ancient, I am the Land. My beginnings are lost in the darkness of the past. I am not dead. Nor am I alive. I am undead, forever."
— Strahd von Zarovich
Advertisement:

The story sees the adventurers being transported into Barovia, a land of mystery and horror ruled by the vampire Strahd von Zarovich. With the entire land surrounded by a deadly mist that prevents its inhabitants from escaping, the adventurers are forced to scour the dreaded domain to obtain powerful artifacts and trustworthy allies before taking on the vampire himself.

DISCLAIMER: Wizards of the Coast cannot be held liable for any longterm side effects of venturing into the dread realm of Ravenloft, such as lycanthropy, vampirism, a fear of dead things, a fear of living things, an inability to sleep without a nightlight on and a +5 holy avenger under your pillow, and the unsettling suspicion that Strahd is too clever to be so easily defeated and that this is all just part of some grand scheme of his to extend his power beyond Barovia. You didn't think you could escape unless he wanted you to, did you?